We are very shocked and appalled by the brutal and criminal attack by Iraqi forces against unarmed and defenseless Iranian residents in Camp Ashraf, north east of Baghdad, on 1 September 2013. 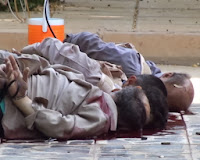 The UN team, who visited the camp a day after, reported that they saw 52 bodies all suffering gunshot wounds mainly in the upper part of the body, many with their hands tied behind their back and executed with a bullet in the head. 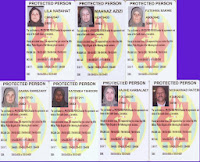 The Ashraf residents were all ‘protected persons’ under the 4th Geneva Convention and were officially declared as ‘people of concern’ by UNHCR.
The attack was swiftly condemned by Foreign Minister John Baird and by many other countries and human rights organizations. 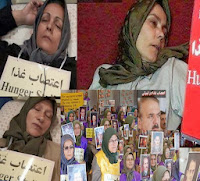 Seven innocent refugees including six women have been taken hostage by the Iraqi forces during the attack and are reported to be under torture and interrogation and risking to be extradited to Iran.
The hostages have gone on hunger strike and simultaneously families, relatives and supporters of Camp Ashraf residents in Canada started a hunger strike in Ottawa on 2 Sep 2013. 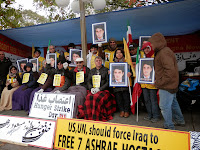 Similar hunger strikes go on in five other locations in the world: in Berlin, London, Geneva, Melbourne and in Camp Liberty in Iraq.

We support the just demands of the hunger strikers. It is absolutely necessary that our country takes a firm position to: Call for the release of the hostages who are kept by Iraqi Government, Call for the protection of Camp Liberty and the remaining survivors of the attack by UN Bleu Helmets; Call for an independent investigation into the massacre of 1 September to bring those responsible for this crime against humanity to justice.
Posted by Unknown at 19:14